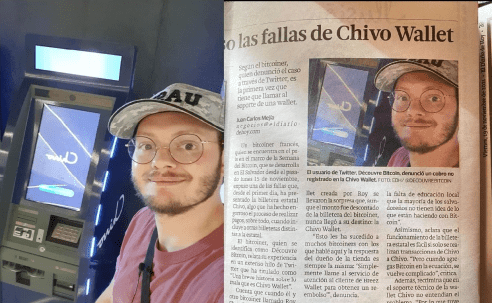 From November 16 to 18, 2021, was held in Salvador Adopting Bitcoin , an event that brought together the Bitcoin community and the Lightning Network in the first in the world to have made Bitcoin a legal tender, alongside the US dollar.

Among the many bitcoiners who made the trip, several French were on the trip, this is the case of Rogzy who some know better as “Discover Bitcoin”. This young BTC enthusiast offers a 100% Bitcoin educational YouTube channel as well as the Discover Bitcoin platform which includes several free training courses.

Anyone who considers himself a “Bitcoin educator” (description from his Twitter account) does a tremendous job of popularization on a daily basis.

On November 16, 2021 Rogzy caught our attention by publishing a first blog post titled “Bitcoin in El Salvador”. In this article, he testified to reality with regard to the adoption of Bitcoin and the use of the Chivo state wallet, of which he did not hesitate to highlight the imperfections and failures.

On his return to France after 8 days in El Salvador, our content director David Nathan interviewed him to find out more about this getaway.

Icograndslam: What motivated you to take this trip?

Rogzy: I’ve wanted to go to Bitcoin Beach in El Salvador for a long time, so between the legalization of Bitcoin and the Adopting Bitcoin event, let’s say I didn’t really have any excuses anymore. I also told myself that this trip would be the perfect opportunity to test the adoption of Bitcoin and different solutions such as the Lightning Network and the Chivo wallet.

And so, what is your record?
What I realized is that the adoption of Bitcoin does exist in El Salvador, but that it is not where one would have expected it. Indeed, it is mainly entrepreneurs who use “real Bitcoin” via solutions like OpenNode. There is indeed an adoption of BTC, but especially on the part of giants like McDonald’s, which allow payment via the Lightning Network. Unfortunately, the poorest people, who are often less educated, don’t know the difference between a custodial solution like Chivo and non-custodial like other Bitcoin wallets. There is a real educational work to be done in this direction because they do not necessarily realize that they are using a “fake Bitcoin”.

Your verdict on the Chivo wallet?
The Chivo wallet presents several major problems. First of all, we noticed that there were bugs with regard to the transactions which do not all go through systematically. Concretely, we were forced to pay merchants a second time with dollars, which is very problematic. It’s a bit of a return to the double-spending problem that Satoshi had solved. In my opinion, 99% of the population does not differentiate between Chivo wallet and Bitcoin. It is the merchants, the big brands that make the distinction very well. Because when you look closely, the Chivo wallet is nothing more than a fully centralized database. We are far from the fundamentals of Bitcoin!

Another big black point with Chivo is the fact that it is built in a very opaque way, the source code not being accessible. This opacity is also a criticism that we can make against the government and its Bitcoin assets because we cannot verify that the BTC funds are available. We should only trust Bukele’s Tweets, there has been no independent audit. I do not know if this is incompetence or if it is a situation that suits the government well, but this lack of transparency is in my opinion a big problem.

I want to give him the benefit of the doubt. I think it has more to gain if the adoption of Bitcoin is successful, if investors arrive in El Salvador than the other way around. He had the courage to say shit to the IMF, and in that he is clearly different from other leaders, he is “one in a hundred” in that sense, but the real question remains whether he is going to be that “one in a hundred”. mille ”which will respect Bitcoin’s values ​​such as transparency. The worst part is that Chivo could very well function as a Bitcoin sidechain, as is the case with Liquid, so to see how that will evolve.

What is the reality in the country?

It is a country very divided when it comes to poverty in particular. The reality is that it is a very dangerous country where there are neighborhoods in which it is not recommended to walk alone, let alone in the evening. It is a country where security is a problem and the sign of a very strong social divide.

Do you remain confident despite all these problems?

Yes. What I find especially positive is that the Bitcoin Beach initiative which was at the origin of the adoption of Bitcoin in El Salvador showed that it was possible to do it, it served as proof. concept in a way. Moreover, there are already other neighboring countries of El Salvador that are looking into the subject. There is also something positive about this country-wide experience, it is the laboratory side for chains like McDonald’s which have adapted perfectly and have succeeded in rolling out Bitcoin payment options. Once the entire payment infrastructure is working in El Salvador, all they have to do is transpose the model to the United States for example, or elsewhere, it’s just a matter of scale.

However, I find that the whole educational component really needs to be developed. Most of the people who downloaded the Chivo wallet did so to get the free $ 30, without really understanding how Bitcoin could be of interest.