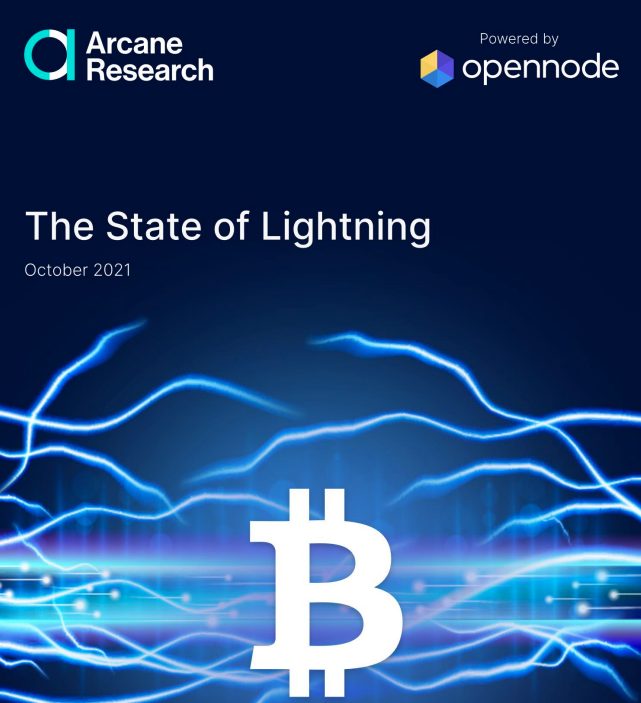 As the price of Bitcoin (BTC) rose back above the $55,000 mark on Wednesday 6 October, research firm Arcane Research released a study revealing that the Lightning network is increasingly being used in everyday life. According to their experts, Bitcoin adoption is well on its way and we could see hundreds of billions of transactions via the Lightning every year by 2030. The Lightning network is an overlay to the Bitcoin protocol that allows for instant transactions and does not require huge network fees. According to the study, the number of Lightning nodes increased by 5% in one month, the number of channels increased by almost 8% and the total capacity of the network jumped by 26% to 2,999 BTC, or $152 million. Launched in 2018, the use of Lightning accelerated considerably at the end of 2020 and then adopted an upward trajectory to become parabolic in September 2021. The evolution of the network will obviously be closely monitored and it is expected to grow.

Let’s take a look at El Salvador, the country that made Bitcoin a legal tender on September 7 and has been used in everyday life by the country’s inhabitants and merchants ever since. Chivo is not only a Bitcoin platform, but also a wallet and ATMs set up in El Salvador and the United States, allowing expatriates to send money to their home country at low cost. Nayib Bukele, the president of El Salvador, said this week that about $2 million was being transferred daily through the Chivo platform and that bitcoin purchases were increasing. According to him, the volume of Bitcoin purchases is four times higher than sales. At the same time, many Chivo users have reported problems with the application and complain that their complaints go unanswered.

Billionaire Soros’ fund gets into Bitcoin

It was known that the famous investment fund Soros Fund Management, which manages more than $70 billion, has been interested in crypto-currencies since 2018, but it is only since the summer of 2021 that it has concretely taken the step. Dawn Fitzpatrick, the fund’s CEO, has given her traders the green light to enter the Bitcoin market. According to her, Bitcoin is now more than just a safe haven against inflation. “I think it has passed the point of becoming mainstream,” she said on 5 October 2021. Big news when you consider that it is the second largest investment fund in the world after BridgeWater Associates. While it is still difficult to pinpoint the exact reasons why the price of Bitcoin is going up or down, many observers believe that this news is what caused BTC to rise by 9% in 24 hours.

The world of banking and crypto-currencies are increasingly flirting together. The latest example is the well-known digital asset investment company CoinShares, which is investing in Swiss online bank FlowBank with a stake of over 9% in the company. Founded in 2020, FlowBank holds a banking licence issued by the Swiss Financial Market Supervisory Authority (FINMA). Having noticed that many of its customers were showing an interest in cryptocurrency, the Swiss financial institution responded to their request. FlowBank’s clients will be able to invest in the exchange-traded products offered by CoinShares. Thanks to CoinShares’ investment, the bank will launch a number of new cryptocurrency-related features for its customers from 2022. The value of this latest investment was not disclosed.

Brazil wants to regulate cryptocurrencies… to better adopt them

In Brazil, a parliamentary bill will be put to a vote in the lower house. If passed, the measure will place crypto exchanges under a regulatory umbrella and require them to keep records of their customers’ transactions, lift customer anonymity and obtain a licence to operate from Brazil’s Central Bank. The bill was drafted following the discovery of a crypto “financial pyramid” that claimed 300,000 victims in the Rio de Janeiro region. Specifically, the length of prison sentences for money laundering offences related to cryptocurrencies will be increased from 3 to 10 years, to 4 to 16 years. For MP Aureo Ribeiro, who is proposing the bill, it is important to separate the wheat from the chaff by creating regulations. “You could use your crypto-assets to buy a house, a car, go to McDonald’s to buy a hamburger, he said.” After El Salvador, will Brazil be the next crypto-nation? To be continued…